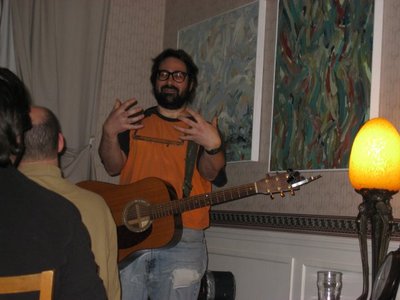 Here I am describing my Dream Girl

But first things first. I wanna say thanks to all the friends new and old with whom congregated last weekend to watch starfucker petunia party like it was 1999. I remember them as a lesbian band, and now there are none, but maybe my memory is faulty...along the same lines, That two leg/four leg phrase on the barn looks different too...oh well.

lets get started, shall we?

If you've spoken to me for 10 minutes, you prolly know that i enjoy, in no specific order. Informed discourse, Minor League Baseball, Those talky brooding movies where nothing happens, Naked chicks, House concerts and heartbreak.

and Guess which one I wanna do in your living room?

hear me out…or in.
The recent warm weather has me getting my festival equipment ready to go. First festival of the season for me is XFS. As I will explain below, i'm pretty excited to share a stage with such fine musicians.

But of course, sometimes you can't get to the folk festival. OR you get there and don't camp because the sitter really needs to be home by 10pm or you insist on a bed and soap and running water, so you miss all the action. The past couple years, I have received some invitations from fans to bring the festival to them. I've done shows in living rooms, backyard BBQs, even state parks. This summer, I've got the 7-year ramblin' itch, so if you'd like your own private folk festival, regardless of where you are in the country, send me an email and we'll work out the details. I love doing these private shows so I keep it really affordable. Relive those glory days from 10 years ago where you sang Hookers and Blow with that hippie chick in your dorm. Your new wife will love it!

Seriously, in my not nearly humble enough opinion, the best way to hear songwriters sing their songs is when you flense away all of the bullshit that gets between you and a good show. And house concerts do just that. plus, You can convince you're friends that you're cooler than you actually are. (and you're already pretty cool as it is)

anyway. I'm hoping to play my songs for more of you this summer, than in past summers. and i hope that prospect makes you as happy as it makes me. i miss you schmoopy.

As you see above, or will see below, i've got some pretty cool shows coming up. On the 24th of may i'll be one of like 70 acts playing Bob Dylan's 70th birthday tribute party, As, i'm sure you know, Hibbing's pride is quite the singer, and apparently he dabbles with the pen as well. John Train and Ken Kweeder have been running this shindig at Rembrandts for the past few years and it's quite a thing. in fact, "it's a pip of a ceremonial"* Seriously, Top notch players singing top notch songs, and if you don't like one, wait 5 minutes. I'm looking over the list and, like the best horror movies, there are some great performers and some deep cuts, I'm playing somewhere in the middle, Peep the specs here.

then, on Saturday June 4th. at 8:30, come to the grape room. when you get there and see the rock and/or roll bands sound checking downstairs, head on up the stairs where i'll be strumming' solo style. singing my songs and advocating the overthrow of the 1%. By the time the bands start up a couple hours later, you'll be so fired up, you'll wish they were more metalier, or more skinheadier (that's skinheadlier)** or Michael Moorerer. Should be a fun way to spend a few early hours on a sat evening, and it's manayunk, so there's plenty of parking.


but all of that is just the preamble for the really big shoe that's a-happinin' at the country creek winery on the weekend of june 10th-11th. That's the 11th annual X-fest and a certain Dork is sharing the stage with
Peter Stampfel
Hoots and Hellmouth,
Pesky J Nixon,
The Electric Man ,
The Bucks Band (School of Rock),
The Turnips ,
Carla Ulbrich,
The Punkabillys,
Roosevelt Dime

Y'can come for the day, or the days, or you can camp like a good, dirty hippie.

There's venders selling those tiedye cotton dresses, and artwork made out of old forks, and you can buy a fancy glass pipe for your "tobacco".

There's food, with and without faces, and I think we're even getting dunking booth. seriously, for like $2 you can try to send this whiney folksinger and a beat up guitar to visit Davey Jones Locker***
check it out, yo...


Now the bad news is that, alas, as great as these shows sound, they ain't gonna happen. Cause if you do the bible math^ Jebus is a-coming back like Rambo, or Rocky, or Emmanuelle. Now most of you people are fundamentally good folks, so i know yer gonna get sucked up rapture style. I will dearly miss you, but my years on the road and the poor selection of truckstop audio books has exposed me to an end times novel or two, and I'll be ok. I know how to get along…and send me your addresses, and i'll feed your dogs and ferrets and hermit crabs and whatnot^^

Those of you left behind like me, antisocialmedia connect with me and we'll all tweetup and trade postapocolyptic swag, like petrol and women.


So, as most of you heard, The final america hating slamic fundamentalist is dead^^^ and that actually means a career change for the dork. As a select few of you are aware, I was less than an inch away from joining Seal Team 6 and would've been psyched to be a part of Operation Pornstash, but alas, me and the boys on Seal Team 6 and 7/8ths were deemed too valuable for the mission and were stationed at seawo--…well, it's secret, so i can't tell you exactly where, but I had my phone on the whole time, so email steve jobs macdaddy@apple.com and he can send you my GPS logs. Lets just say, Hillary wasn't the only one photoshopped out of the picture.

So, our lil group has been disbanded, and with guantanamo bay closed just like President Unicorn promised. The folk music gigs are dryer than usual. Now of course with A presidential erection. a lil over a year away, this is traditionally the time that i announce my candidacy, for either party to choose me as their vice presidential nominee. You are all familiar with my longstanding desire to achieve that dream job, y'know, the one with the great pay, bodyguards trained to take a bullet for you, and no responsibility. I've pontificated on my platform's stellar planks before, so i need not do it now. Especially in light of my recent decision.

You, see whether you're a southern religious nut, former fatty, A former southern racist and current fatty, a gubernatorial quitter, or an Omerosa Busey Wrangler, it seems not running for president is the new running for president. So please count me among that esteemed crew. Looking to LBJ as our godfather, We embrace our disentanglement. We will not seek, nor will we accept our party's nomination.*^

So what do i do now…as you know, i Have tens if not twenties of dollars worth of campaign contributions just sitting in a jar upstairs and I plan to use that money for the betterment of this country…specifically the geographic part of this country that is located where my old garbage disposal sits under the sink, as droopy and useless as…well metaphor eludes me right now.

Anyway, i'm planning on schlepping out to strum for a few of you this summer (7 year itch and whatnot). I hope to do it in some of the far away places that i haven't been able to get to in years. So don't get those dork tattoos covered with roses and dolphins just yet.

Here's the Mia Culpa Part. over the past few years, the merch delivery system, modeled after the bureau of indian affairs, has proven…glitchy.

It's quite possible that over the years, Orders have slipped through the bureaucratic and downright kafkaesque cracks that is PRHQMD23.804/c

So, lets do this. If there have been merchy problems in the past, and you are still on this list somehow. lets go with the honor system. email me at adam@adambrodsky.com tell me what didn't' get where it was apposedta and imam get you some of your shit.

I'll do this till the end of June, so if you're sitting around PF Chang's one happy hour and one of your drunk coworkers is going on about how she never got that Jews Kick Ass Lunch box she ordered back in 2007, point her over to me*^^ and i'll make her love me again.

and super duper lastly, though, you'd not suspect it from these unibomberesque ramblings, i can manage the 140 with equal aplomb and would love to get you in on some of that tweet action. follow it here

I've got a few local shows, and i'm hoping to have some unlocal shows that are local to you…very very local..(nudge nudge, wink, bob's apparently, your uncle)

*yeah, i just quoted Mr. Hand from South Pacific. What am I? On drugs?

^and bible math is infuckingfaliable. I mean, as soon as you understand that 2+2 actually, really and truly equals 5, the rest falls into place

*^we do however reserve the right to write books and cash checks.

*^^especially if she's cute and has a master's degree