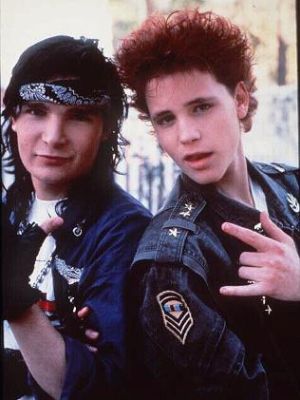 Me, "A furry green fox" and "Talking ugly" will take the stage and not give it back until you convince us that you love us.
http://www.jugglinggypsy.com

A brief missive, an honorable call to duty, an imminent show and one on the horizon.

Yesterday while taking a schvitz with a congressman, WHCOS Rahm Emmanuel, pink and nekkid strode up to me and poked his finger in my chest.* I was deeply touched** and honored as he informed me that I had been hand*** picked by the president to head a task force to find America its next Corey.

As you all know, we live in a two Corey System, though not specifically mentioned by the founding fathers, and I do say that amongst the federalist papers you will find John Adams' scathing pan of "Dream a Little Dream", the two Corey system serves us better than any other we have tried in this 234-year-young noble experiment.

Yesterday, or maybe the day before, or whatever, This great nation lost one of its Coreys and now like we did on 9/11 we will rally as the truly extraordinary race we think ourselves. We may take solace that it was our Canadian Corey who is gone to that great surreal life in the sky. The long brutal Los Angeles winters may have taken their toll on his less than stout Torontonian frame. Our American Corey is as annoying and famewhorish as ever, resolute in the knowledge that he must now be twice the unmitigated failure while he temporarily shoulders the load that for many decades now has been spread among two Coreys. And Yes, let not Canadian Corey's death be in vain, for even in death, Canadian Corey was there for his better half, opportuning his survivor a chance to chat with Larry King and add a few scraps of tinsel to his ever rusting fameball.

But fear not my fellow americans, I am to set out upon this great nation (and maybe canada) to find a Corey. This new Corey will not be a placeholder http://www.vatican.va/phome_en.htm  nor a warmed over has been who once fucked Michael Steadman's sister http://en.wikipedia.org/wiki/Corey_Parker_(actor) .
Our New Corey will be a Corey for the 21st century. His movies will not go direct to VHS, they will go direct to Blu-Ray, bitch. His Tweets will be rapturous, and yes, he will have his own reality show…and at the end, he Will hug it out with OEM Corey and they will talk about projects and cleanliness and Lost boys IX

Corey is dead! Long Live Corey! In closing my fellow americans, this nation, under God, shall have a new birth of freedom -- and that a system, of Two Coreys, by Two Coreys, for Two Coreys, shall not perish from the earth.

also, i'm playing at the Juggling Gypsy in Dawson's Creek (Wilmington, NC) it's a very cool joint with a very cool set of owners who have allowed me to taint their stage on Friday 3/12. Tho Pacey and Joey have long abandoned the perpetually golden sunlit hamlet for Vancouver, BC and Xenu's home planet respectively, I shall be strumming and slurring with the North Carolinian abandon of one who has not yet heard that cigarettes are in fact addictive and that Stock Car Racing is stupid.

There will be more news about a show in Newtown, PA in april, At the Temperance house. it is a performance at the request of the mayor, so suck on that peasants.

See you out there, i'll be the dork with the guitar and the "So you think you're a Corey^" pamphlets.

Me, "A furry green fox" and "Talking ugly" will take the stage and not give it back until you convince us that you love us.
http://www.jugglinggypsy.com