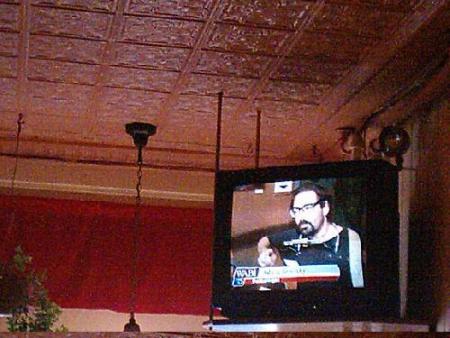 i wrote a poem this morning watching meet the press, i'd like to share it with you.

a phillies win was very nice
the weather was perfection
yet still, a man of jesus christ
brought sunday's favorite section

for to the river city fest,
my fishtown tush did stroll
to see the booths, soak in the sun
eat sausage on a roll

when there, espied i, scores of booths
a cause or two with each
some proffered home made jewelry
some soaps that smelled of peach

a crisply colored codex caught
my eye and then my thumb
and what i saw on pages in,
did almost leave me dumb

in children's words, for children meant
bright pictures void of laugh
of how a cow is treated and
what's worse, of how a calf

PETA brings it hard and whole
they seldom pull a punch
their stock is shock, their trade is made
to guilt you o'er your lunch

though birds games are the highlight of
my weekend, nee my fall
i told him that my hands were tied
i'd give no coin at all.

"you see sir" said i "irony,
is here and on display
for your religion's blood and hatred
clouds up this nice day"

aback he clearly now was taken
as challenged, he was, rare
"do you defend your institute
do you sir, even dare?"

again i asked him to defend
millennia of sin.
if not from talking points without.
sir, what of from within?

forever facts are faith's fierce foe
my yoke, with he my cow
and all that he could meekly moo
was "away, you may go now"

is that you're whole and full defense
cause more, i will allow
with yellow'd tooth and eyes cast down
"away you may go now"

that story is 100% true and made me very happy.

now down to bidness.

I forget whether he was opening for me or if it was a co-bill, but we were going to drive out there together, play sets separately and then find the 2nd and 3rd cutest girls in the place and talk to them until they liked our game or it becomes painfully awkward cause they don't.

So, ever the consummate professionals* We loaded up the old Permanent Records Mobile Assault Vehicle and left around noon for what we figured would be a shackletonion trek, fittingly close to where the Continental army spent that cold winter of rags and man on man spooning, when the country was young and waxing. we packed all our gear and two sets of batteries and hardtack and bottled water and three kinds of jerky. Though it was merely implicit, i'm sure each of us had made personal piece with their implied consent to be eaten if it ever came down to it.

Upon our arrival, i remember the look of disbelief thrown our way by Lance and the barrista who were certain that 30 miles of treacherous black and cloudy ice would've enticed even the most dedicated folksmen into a saturday night of reheated mexican food and very special Urkel episodes. But, like i said, shackletonian.

so we go to the green room and huddle near the space heater and come to terms that we probably risked life and higher insurance rates to play songs for each other, which, minus the sleigh ride, was how we'd spent most of the last week, (much to the dismay of our third roommate)**

twas then that we played the "Fuck it" card. Lets just go up on stage together and have the worlds smallest song circle.

at showtime there was actually a nice little crowd, maybe 20 folks scattered about the room. We eschewed the sound system entirely and coaxed the back of the bus folk to inhabit the stage-side tables and what happened next was what some people more fanciful than myself would call magic. It was just a great show. I'm pretty sure fern was there, you can ask her*** Anyway, that may or may or may not have been the first Adam+Butch show and i do remember that we have over the years booked a few more and they almost never fail to be great^

Adam, why the fuck are you babbling on about some homo-erotic show you played in another century? well because i'mma do it again real soon i tells ya.

Butch has since become a southerner, because he can stomach jebus more than some people. He has acquired a Masters Degree in folklore and he's like the 10th best dulcimer player in the country^^ But he's still a top notch songwriter and he's like the only person on earth who understands what i call my musical chops and what others call, "that racket". All sarcasm and kidding aside, this show will be one of the best show's you'll see this year, and i'm kinda bummed that i have to work and wont be able to be in the audience.

As if the gig wasn't cool enough, it is exponentially enhanced by its location. or for you realtors out there its locationlocationlocation. You see this is a Front Porch House Concert and is getting' bizzee up in the Marshall Compound In Robinsville, NJ.

bring something to share, and bring a tent and yo' axe cause afterwards, theys gonna be a meeting, bonfire style. Stay over, get drunk, and who knows, maybe you'll find the love of your life that night, maybe he plays harmonica through a rack. The details are here. http://www.facebook.com/event.php?eid=123832181046447

so, now you know, it's gonna be friday night October 7th. at 20:00 in Robbinsville, NJ. hmmm. 10/7? why does that sound familiar? i'll tell you why, It's erev Yom Kippur, and yeah, i maybe shouldn't have booked a gig, but i did, because i'm stupid, so now i will be forced to revisit my complicated relationship with Sandy Koufax. So if you're all chosen and shit, and feel like this would be an affront to hashem, and those who died at the hands of the egyptians/byzantines/romans/spanish/russians/nazis/catholics/christians/blackseptemberians,  I offer you these two mitigations

and yeah, technically there could be a phillies game that night, but only if they let the cardinals take it to 5 games. and  just put that out of your head, it ain't like that anymore round here.

can we bring the lights down a bit? thanks. (sits on stages edge and unties the bowtie of his tuxedo.)

truth is, butch is one of my dearest and oldest friends, and a pretty great songwriter and musician, and the opportunity to play with him is an all too rare treat for me. Even rarer, is the fact that you can watch. Cherry that sunday with The front porch's own Barak and Michelle playing host*^, you might not wanna miss this.

also, butch was married at this house, so even if the gig sucks donkey balls, it'll still not be the biggest mistake he ever made at that location.

**who at first was enamored but that was months ago

***fern is the kind of gal who will either remember, or spin fond lies for our benefit if she doesn't.

^there was one time immediately after some questionable seafood that wasn't terrific.

^^and that's like, out of over a hundred.
^^^jewish sins only, sorry, get your own archaic baseless belief system goyem.

*^they got a real stage and everything!

hits since the dawn of time: